“It’s a life-changing golf program…I’ve had Veterans tell me that it’s saved their lives.” – Clayton Stevens

PGA Pro Clayton Stevens has been with GIVE since 2019, the year he started working as the Director of Golf at Grand Falls Casino & Golf Resort®.

Since becoming involved, he’s been able to see firsthand how our community changes lives. Plus, he’s changed quite a few himself.

This is his story.

GROWING UP AND DISCOVERING GOLF IN INDIANA

Clayton grew up in Northwest Indiana, just outside of Chicagoland.

Though he was an avid enjoyer of sports essentially from birth, Clayton never thought he’d end up in the golf business, let alone become an accomplished PGA Pro with multiple awards to his name. He was pretty much operating under the assumption that he’d enter the steel business like his father and his two brothers.

Everything changed when Clayton got a job at a country club in high school. He spent his summers immersed in the world of golf, slowly falling in love with the game each day.

When the time came to start thinking about post-graduation plans, he thought golf might be a good avenue to pursue. He was right. 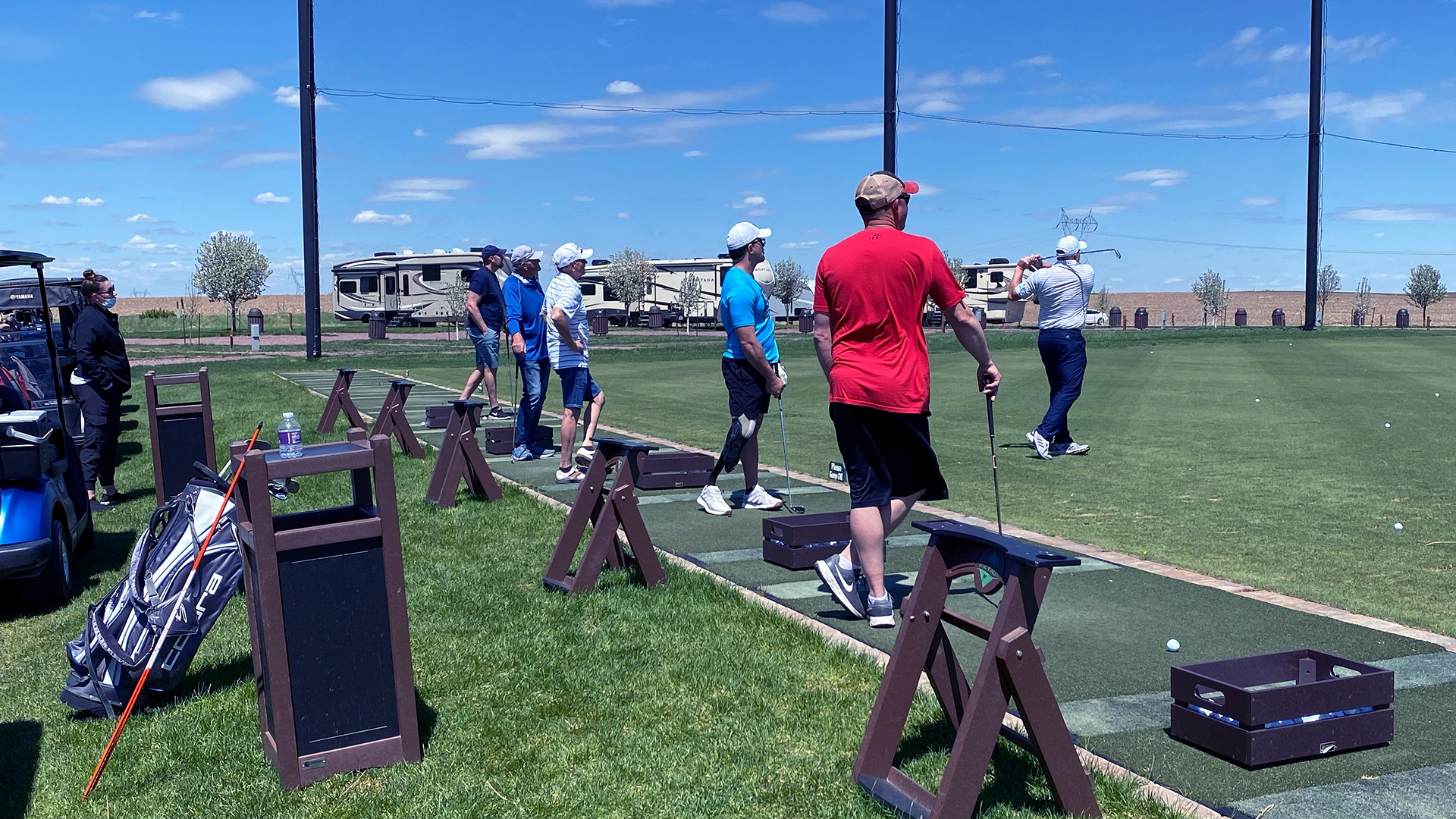 MIGRATING BACK & FORTH BETWEEN THE MIDWEST & GOLDEN COAST

After graduating from high school, Clayton moved out west to sunny California to attend the San Diego Golf Academy. He returned to the Midwest once he graduated, where he began building the foundation of his professional golf career—at least for the time being.

Clayton started by working as a second assistant, essentially the lead of operations, at Sand Creek Country Club in Indiana. And he was working hard.

Clayton admitted that at the time, he hadn’t considered or realized how demanding golf jobs could be. Naturally, he began to feel a little bit burned out, so he decided to work for his father’s steel company for a while.

But this only reinforced his love for the game.

Clayton said, “I could tell you that even though I was working 60, 70 hours [per week] in the golf business, it was a lot more fun than working 40 hours as a steelworker.”

Sometimes, you don’t know what you have until you’re missing out on it.

With his passion reignited, Clayton decided to move back to California again to pursue professional golf. He enrolled in the PGA of America’s apprenticeship program, rapidly developing his skills in the process and eventually taking a position at the prestigious Pauma Valley Country Club.

After he got married and started raising a family, Clayton decided to come home to the Midwest—for good this time. He started advancing his career at a breakneck pace, working as the first assistant at Sunset Ridge Country Club, earning his PGA membership at the Country Club of Peoria, then working as Director of Golf at WeaverRidge Golf Club until the property was sold in 2019.

DISCOVERING GIVE AFTER LANDING A JOB AT GRAND FALLS

Clayton began working as Director of Golf at Grand Falls in 2019. During the hiring process, he was told that part of his job would include getting involved with a non-profit organization named GIVE, which serves Iowa’s Veterans by providing them with rehabilitative golf instruction. 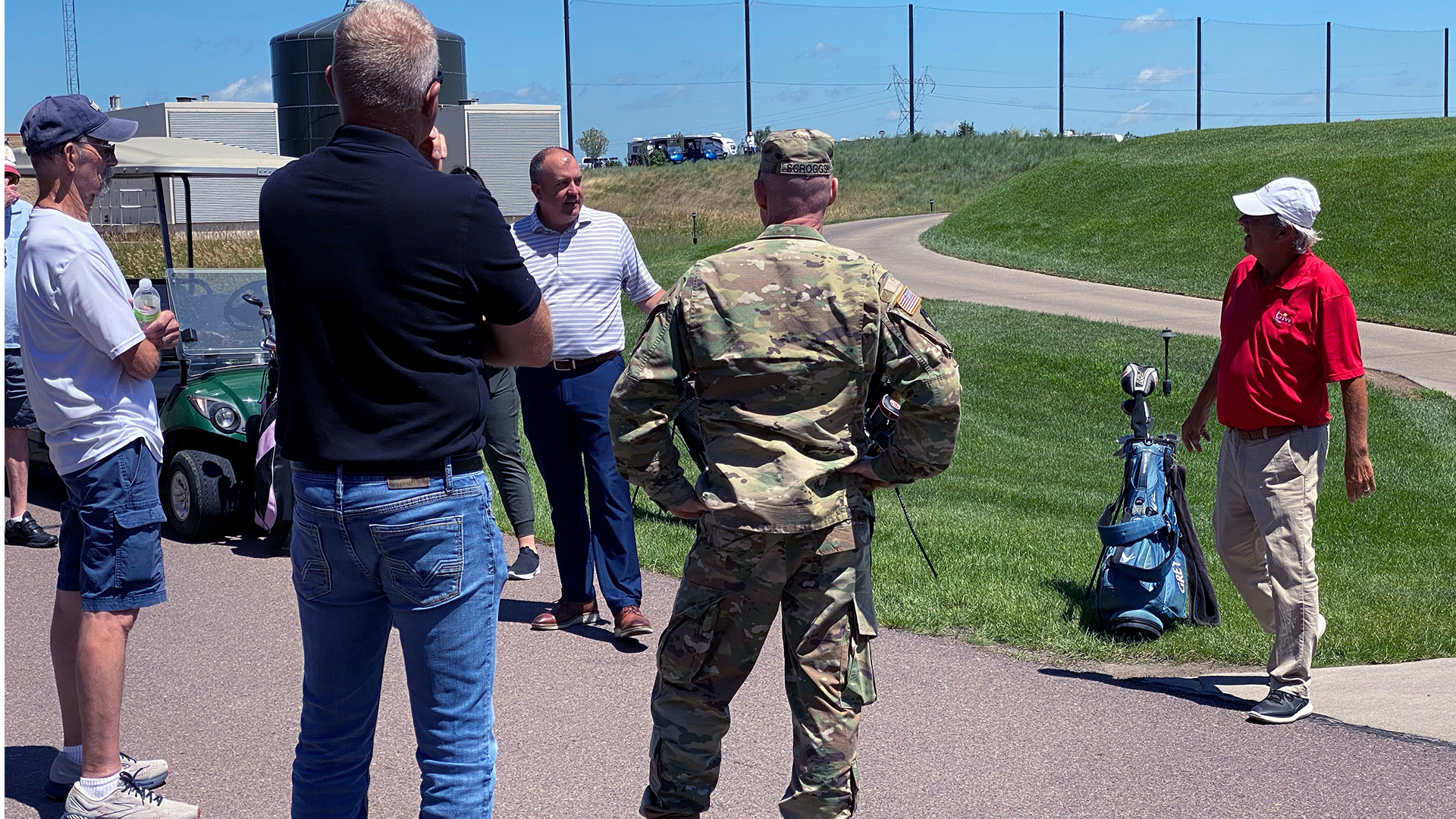 “They had mentioned something about the GIVE program in my interview, but at the time, I just really didn’t realize what it was,” said Clayton. “I was nervous. I really didn’t know what to expect.”

“In Illinois…we really didn’t have something as unique as the GIVE program,” he added.

Right out of the gate, Clayton knew that GIVE was going to be important to him. The atmosphere just felt special.

Though he didn’t have direct experience working with Veterans facing injuries, disabilities, PTSD, or other similar challenges, Clayton still knew he could help. He had spent many years teaching golfers of all age ranges and skill sets, including seniors with limited mobility, which lent well to this new adventure.

“There were a few things that I hadn’t dealt with as a teacher before…We had to try to figure out things that would work,” he said. “We had some amputees…guys with balance issues, vision, hearing. Some of the things we take for granted.”

“Fortunately, I had some support from Rick Krsnak who’d been associated with the GIVE program pretty much since it started here at Grand Fall,” said Clayton. “He was my rock to lean on.”

Almost immediately after he became accustomed to it, Clayton began optimizing the GIVE program at Grand Falls to help it better serve our Veterans. “We really changed the program just to be a bit more interactive for the Veterans,” he said.

“We basically started every group or every class by seeing who had prior experience, who had a lot of experience, and who had zero experience with the game of golf,” Clayton said. “We could section these Veterans out into these three distinct groups so that each one of our instructors that we were working with knew what to teach them.” 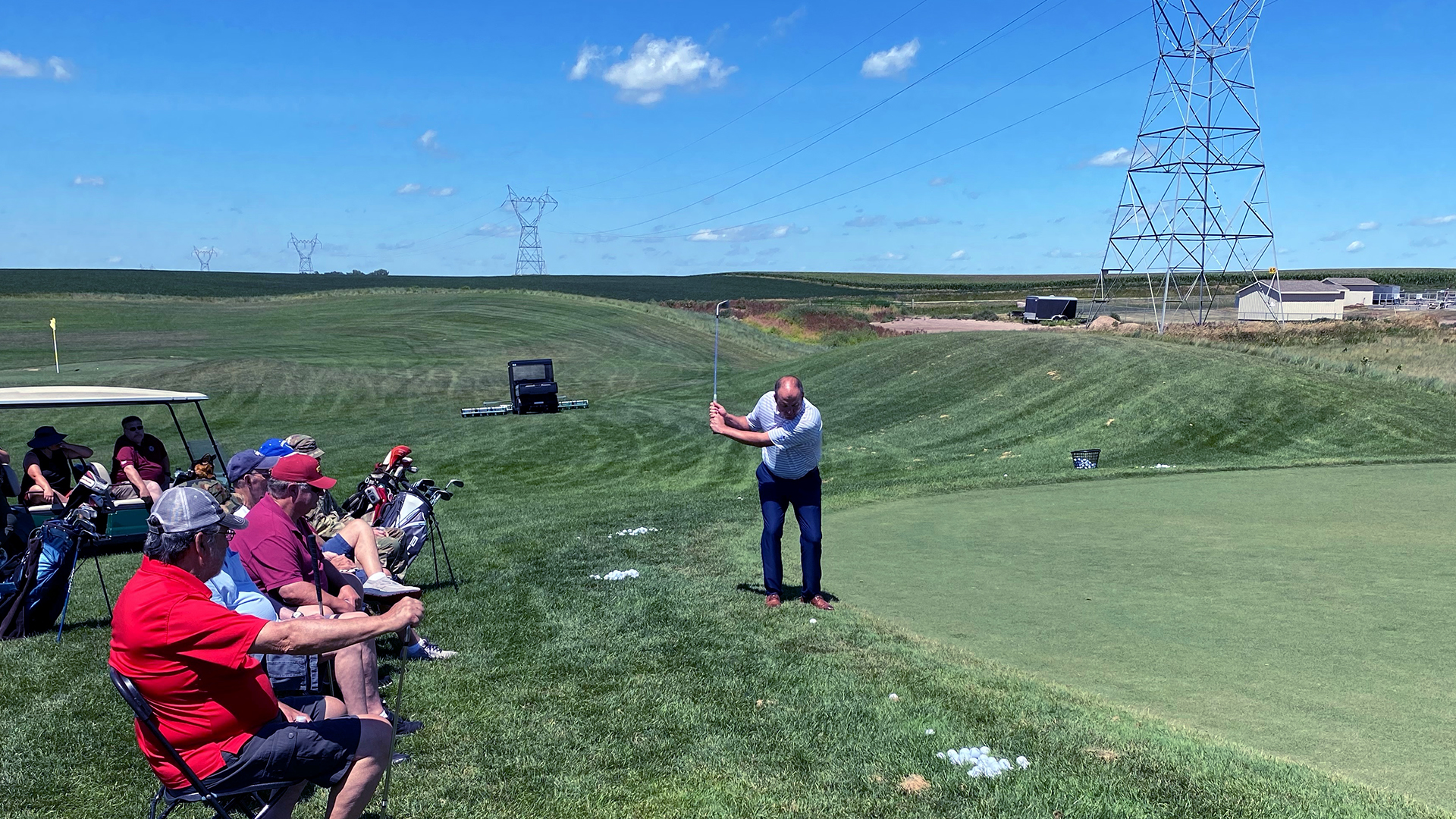 On top of evolving GIVE’s instruction style, Clayton even helped to create a new program initiative.

“We do a winter online series of lessons for our Veterans that I started after my first year,” he said. “I thought, ‘ok, we end the GIVE sessions and then we go all winter long and these guys are just sitting at home. Why not do a couple video broadcasts?’”

As it turns out, this was a fantastic idea. Both he and our Veterans have been having a blast with it.

Clayton said, “What’s really cool about those is the guys are all watching me and I can see them all, in their different little windows on the screen…You can see them stand up, get that golf grip going. It’s really unique.”

“They’re getting involved…They ask questions,” he said.  “It’s just another reason for them to stay engaged in the game of golf.”

Clayton has always loved teaching the game of golf, but he said there’s nothing else out there than can compare to the feeling of leading a GIVE class.

For example, he described what it’s like working with blind or visually impaired Veterans.

“You’re talking about guys that can’t see,” he said. “Guys that had never even thought about playing the game before because they thought, ’why would I play golf? I can’t play golf.’”

“To watch them smile after they hit a shot…it’s crazy,” said Clayton.

However, the way Clayton sees it, golf is just the tip of the iceberg in terms of GIVE’s true impact.

“Some of our Veterans with PTSD that have been in wars…” he said. “There’s guys that literally were not getting out of bed.”

“Getting these folks together and watching them create relationships in the program with the other Veterans so they can get out and play—that’s probably the best part of it,” said Clayton. “That’s why it’s there.”

This sense of camaraderie impacts so many parts of Veterans’ lives. For many, it simply helps them feel like they belong—like they matter. To Clayton, there’s nothing more important than that.

“It’s a life-changing golf program for Veterans,” he said. “I’ve had Veterans tell me that it’s saved their lives.” 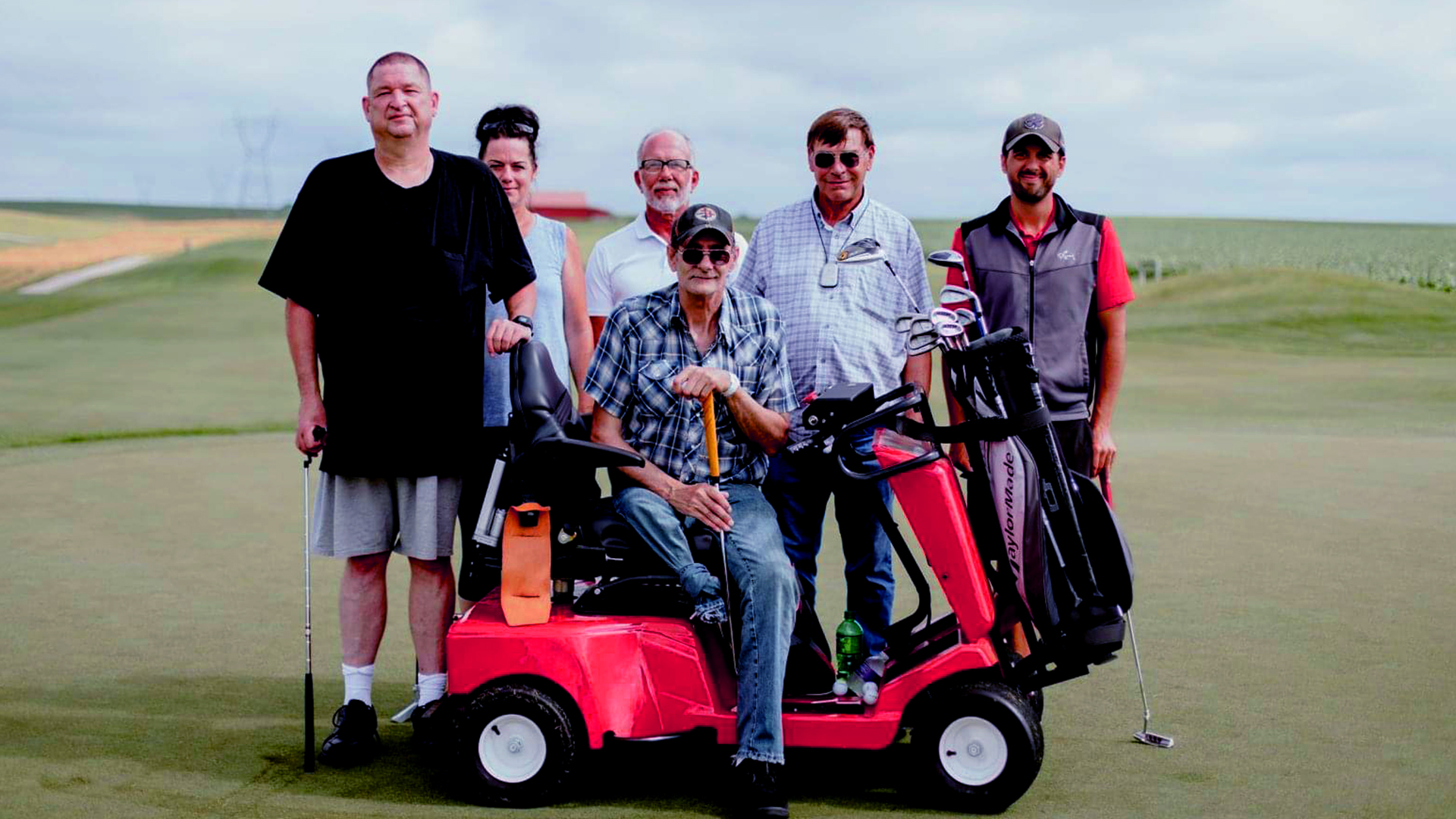 GET INVOLVED WITH THE GIVE COMMUNITY

When it comes to supporting our Veterans here in Iowa, there’s always more work to be done.

We need your help to advance our mission of providing our Veterans with the empowerment, camaraderie, and accessibility they deserve.

If you’re searching for GIVE volunteer opportunities in the greater Sioux Falls area, you can reach out to Clayton directly via email at clayton.stevens@grandfallsresort.com.

Explore our website and follow us on social media to learn more about the GIVE community and how you can support our mission.